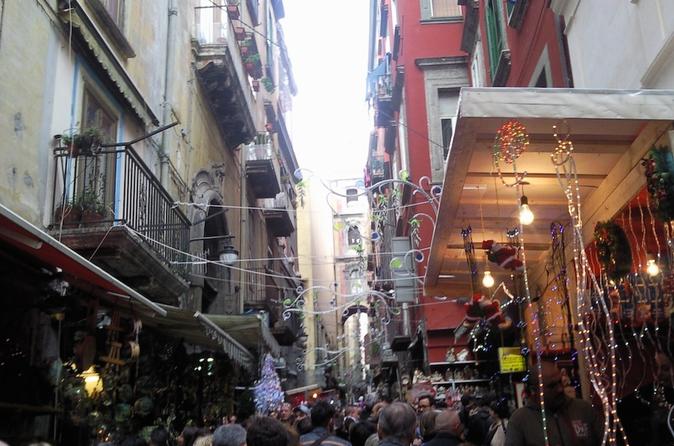 While its food and scenery command devotion, the city’s skulls and castles offer a glimpse into its violent past. Napoli, like Turin, is an occult city, full of magic.

A city where the mystery is hidden behind the art. A city where legends of ghosts still survive among seventeenth-century palaces.

Naples is a city founded by a myth coming from far East. A city where the cult of Isis was the center of esoteric life. Walking through narrow streets, "vichi and vicarielli", we will visit the historic sites of mysterious Naples.

Sacred and profane, this is the Naples city with two faces, like Janus (juanuario - Gennaro). And before you even visit the cathedral where the remains of the saint patron (Saint Gennaro) are kept, you will stop to visit other souls, those "restless". The souls in purgatory.

We will bring our gifts to Lucia, the skull from the bridal veil. From a veil to another, that of the Veiled Christ guarded in the most powerful temple of Neapolitan Masonry: chapel San Severo.

Naples is the city of the Crib, and so you will go your way to the shepherds street. Cribs, rich in esoteric elements.

The tour ends in the popular neighborhood that gave birth to Toto', the Italian comedian. Here, in a jumble of poverty and nobility, we will find the cult of Dead in a giant ossuary: the Cimitero delle Fontanelle.

The tour, structured as it is, develops throughout the day and can be changed in half a day and either replacing or removing a site, according to your needs.