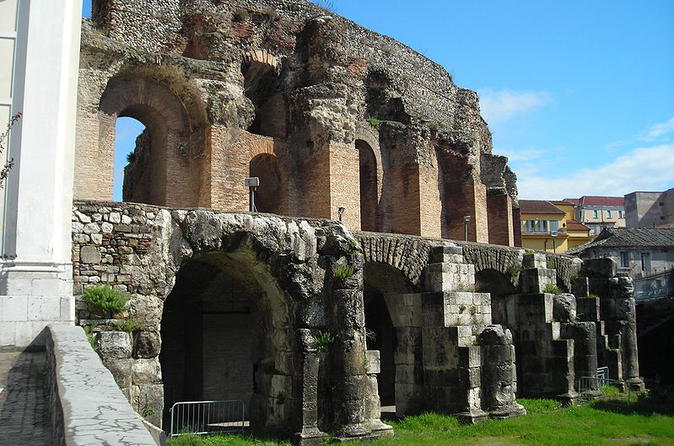 Enjoy an 8-hour tour of Campania including Benevento, Sant'Agata de' Goti, and Caserta.

The first stop of the day is Benevento. Originally known as Maleventum, then Beneventum, and finally Benevento, it was first a Samnite town, then Roman, Lombard, and papal.

Benevento boasts an impressive artistic and historical heritage. In 2011, the church of St. Sophia (built in 760 by the Lombard Duke Arechi II) became part of the UNESCO World Heritage Site called 'Lombards in Italy: the places of power.' You can visit St. Sophia Church and its adjoining monumental complex. It is one of the most important churches in Langobardia Minor to this day, notable mostly for its original star-shape and the unusual arrangement of the pillars and columns. Renovated in Baroque style after the earthquake of 1688, it was then restored to its original form in 1951.

The church is connected to a monastery that was one of the most important cultural centers of the Lombards. Of note is the interesting cloister, rebuilt in the 12th century, and the Museum of Sannio. The church tower, located at the entrance of the square in front of it, dates back to the 18th century.

The second stop on the tour is Sant'Agata de' Goti. The name Sant'Agata de' Goti, as we know it today, comes from two different historical periods. It was during the 6th century that the city was named after Agata, the patron saint of Catania. In the early 14th century, 'de' Goti' was added by a French family in the town. The de Goth family, of whom Pope Clement V was a part, was given the fief of Sant'Agata by Robert of Anjou, and they added their name to the town's. Indeed, it is only during the 14th century that the name Sant'Agata de' Goti  appeared for the first time in an official document. Another story, however, attributes the "de' Goti" to the passage of the Goths in these areas during the 6th century.

Because the area offers a wealth of local produce, this city also gives you the opportunity to be a tasting tour. In fact, you can try the winter apple, specialty cultivated throughout Campania, and enjoy a white wine like Falanghina or a red wine like Aglianico.

Enjoy an 8-hour tour of Campania including Benevento, Sant'Agata de' Goti, and Caserta.